Base cost to manufacture

Scuzzer crates can be acquired from Traders or built in the Factory. Once deployed, Scuzzers cannot be repacked into a crate.

A Scuzzer crate can be beamed from the Pattern buffer onto the Analyser in the Laboratory to research it.

This crate contains one "Scuzzer" droid in Sleep Mode. Open the crate to activate it, and the unit will make itself available to your station's control systems to perform construction, repair, cleaning or security duties. Occasionally used for the transportation of other lifeforms.

When starting a mission or Sandbox game, a player will typically be provided with two Skuzzer crates each containing a Scuzzer MkI. Certain campaign missions may provide additional Scuzzer crates at the beginning or as objectives are completed.

All items found in Scuzzer crates[] 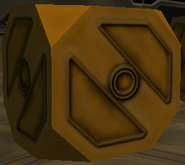 A Scuzzer crate on the deck.
Community content is available under CC-BY-SA unless otherwise noted.
Advertisement