Base cost to manufacture

Technology crates can be acquired from Traders or built in the Factory for the same cost as constructing a Hardplan crate, Scuzzer crate or Equipment crate of the item.

A technology crate can be beamed from the Pattern buffer onto the Analyser in the Laboratory to research it. For the purposes of research it will be treated as if it were a normal copy of the item.

These crates contain technology in its pure form - information. Unpacking a technology crate will release it to your scientists and engineers, giving you the knowledge to create something on demand. Once opened, the appropriate technology is permanently added to your build and factory menu.

All items found in Technology cratesEdit

Items marked with a * above cannot be constructed as technology crates in factories, only obtained from traders.

Arona Daal buys and sells all technology at 200% of his normal buy and sell ranges. Other traders sell from 150% to 250% with some exceptions, and traders that sell the hardplan crate cheaply tend to sell the technology higher. 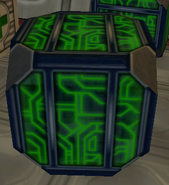 Technology crate unpack menu.
Add a photo to this gallery
Retrieved from "https://startopia.fandom.com/wiki/Technology_crate?oldid=8540"
Community content is available under CC-BY-SA unless otherwise noted.